The main distinction in how menu colors are assigned comes from the two types of header layouts:

Here's a table that shows which header layouts fall into which category.

Table 1: Nav menus according to whether they appear inside or outside the header area

Here's' one example from each header layout category, to show changes as screen width grows smaller and where to change the colors.

In the first category of header layout, the menu appears in the header area. The header background and menu text colors come from Header > Header Style. 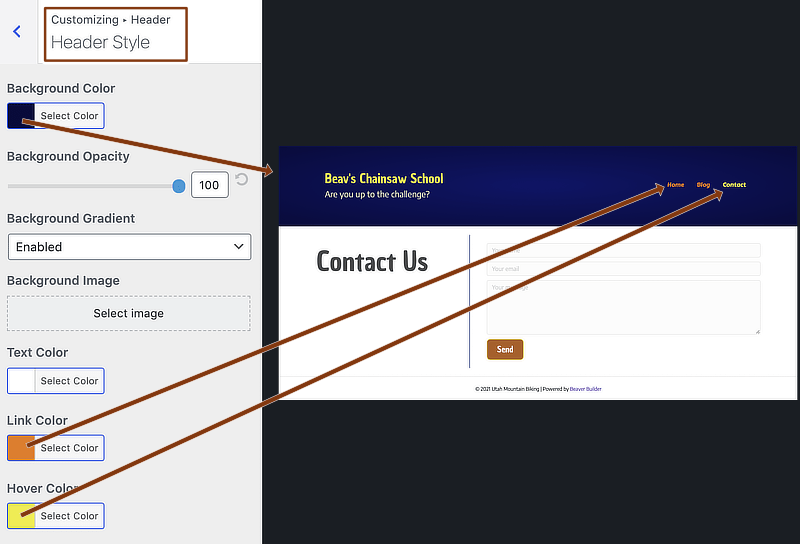 As screen width narrows, you might notice a darker background (if the header background color has a gradient enabled) or border lines above and below the menu (if the gradient is disabled). You can diminish or remove these effects by sliding the Nav Style > Background opacity button, as shown in the following screenshot.

As screen width narrows more, the Nav Right header layout turns into a Nav Centered layout, with a menu bar below the layout that may appear to be a dark color or have a border, as in the following screenshot. Again, if you want to remove these effects, use the Background opacity slider to reduce the opacity:

Type 1 header layouts ignore the color settings on the Header > Nav Style tab but do use the other settings there, shown in this screenshot.

As the screen grows narrower and exceeds a breakpoint, the Menu button or a Hamburger icon appears. Here's an example of a Menu button. The button colors are set on the General > Buttons tab in the Customizer:

When the Menu button is hovered over and clicked, the colors change to the hover settings at General > Buttons, while the menu text colors in the dropdown come from the Header > Header Style text link and hover settings:

If you use a Hamburger icon instead of a Menu button, the menu colors are the same, and the Hamburger icon color also comes from the Header style link color: 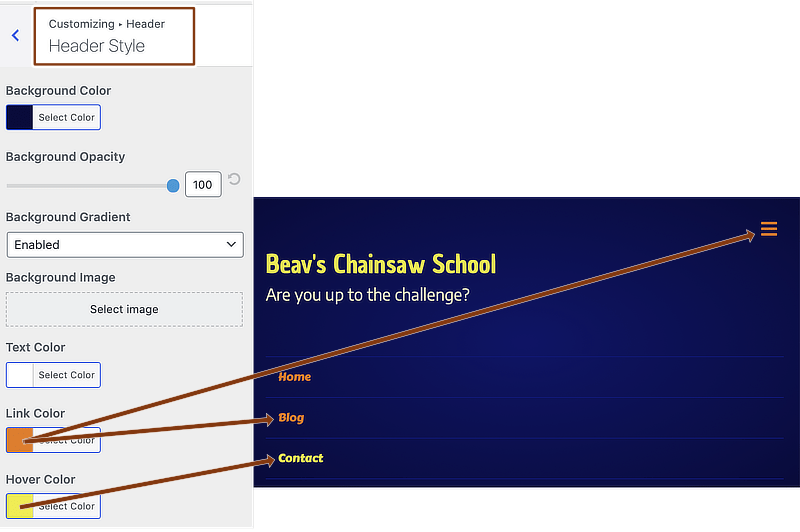 If you're wondering, the site title and tagline colors come from Header > Header logo when Logo type is set to Text.

Nav Bottom and Nav Centered layouts have a menu bar beneath the main header. You can set the menu bar's background color at Header > Nav Style. Here's an example of a Nav Bottom layout on a large screen. 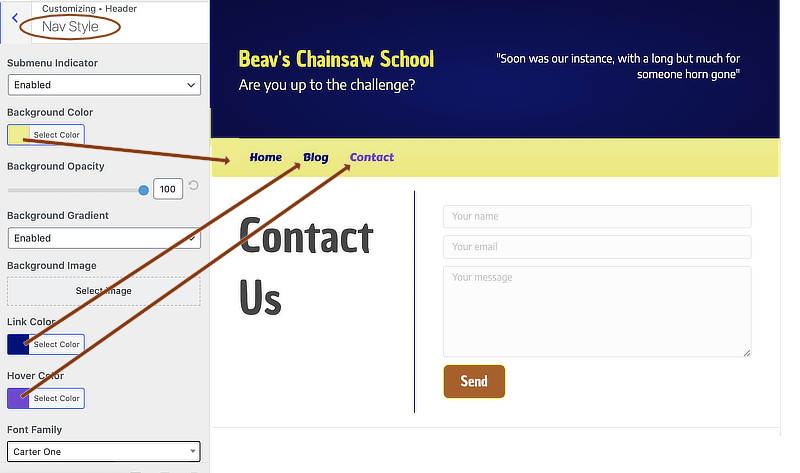 The Hover color setting applies to both hovered links and the currently active link.

Behavior on medium screens mirrors either large screens or small screens depending on the Responsive nav breakpoint setting at Header > Nav layout. See this article for information about Beaver Builder Theme breakpoints.

By default, the Header > Nav layout > Responsive nav breakpoint setting is Small screens only, which means that medium screens keep the menu bar and menu that you see on a large screen.

When the Header > Nav layout > Responsive nav breakpoint setting is Medium & small screens only and screen width goes below the Theme medium breakpoint setting on the General > Layout tab (by default, 992px), the Menu button appears inside this menu bar, as in this screenshot:

The Menu Button colors come from General > Buttons, as described in Example 1.

With the colors we've been using in these examples, the yellow background creates a problem for the expanded menu text, which uses the colors set in Header > Header style:

There are several possible solutions to this problem.

When the screen width for a Nav Bottom or Nav Centered layout goes below the Theme mobile breakpoint setting on the General > Layout tab (by default, 768px), the menu bar disappears entirely and the small-screen menu layouts and colors are identical for all header layouts, as described for Example 1.