Skip to main content
This is unreleased documentation for Beaver Builder Knowledge Base Next version.
For up-to-date documentation, see the latest version (stable).
Version: Next

You can create linear and radial color gradients for row and column backgrounds, background overlays, and row shape layers

To fully understand how the row or column the settings affect the gradient result, it's important to understand the basic concepts of CSS gradients.

Here's a screenshot of the linear gradient settings. 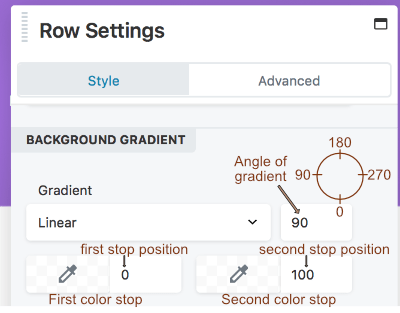 The Beaver Builder linear gradient background requires an angle of gradient and two color stops, described in the following sections.

Imagine a straight line with a direction of movement from one end to the other. The angle of gradient rotates the line along a 360-degree axis, where 0% on the line is the start point of Color 1 and 100% is the end point of Color 2, with a continuous transition from one color to the other, as shown in the following screenshot.

The angle of gradient can be any integer from 0-359. The following screenshot shows examples of the angle of gradient at 0, 90, 180, and 270 degrees. In all of the examples, the first color is set to a navy blue at stop position 0%, and the second color is unspecified at stop position 100%, which in Beaver Builder defaults to white with opacity 0 (i.e., transparent). 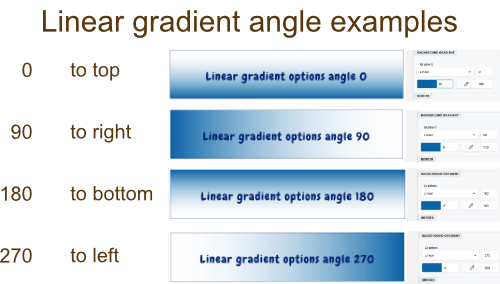 Note: Because the gradient line rotates on a circular axis and the row or column background is rectangular, the 0% and 100% positions can lie outside the row border for some angles. See this article on CSS linear gradients for a detailed description of how linear CSS gradients work.

You can vary the color stop position so the gradient starts and stops further inside or outside the endpoints of the gradient line.

In the following screenshot, the color stop locations are set at -40% and 140%, which causes the gradient to start and stop 40% further beyond the gradient line. This means the row background is only displaying the middle 20% of the entire gradient.

Note: If the Color 1 stop position is equal to or greater than the Color 2 stop position, the result is no gradient at all, as shown in the following screenshot, in which Position 1 is 30% and Position 2 is 20%.

Radial gradients have the first color stop at a center point, radiating outwards in all directions to the second color stop.

You choose where to place the locus of the radial effect. The first color stop position of 0% is at that locus, and the second color stop of 100% is at the row border.

Like linear gradients, you can set stop positions at <0% or >100% to vary where the gradient starts and stops. If you set the Color 1 stop position to equal to or greater than the Color 2 stop position, the results is an oval with solid edges rather than a gradient.